Should I Feed My Cat Fish?

If you are a new cat owner you might be quick to open up a can of tuna and pop it down in front of your feline. When you are at the pet store browsing through the aisles of fish based foods you might grab a couple cans of each to see which one your cat enjoys best. Even though most cats love fish, it isn’t the best food for them. In fact, fish can be downright damaging for cats.

Fish Has Been Linked to Feline Vitamin Deficiencies

Fish, although meat, are not quite the same in terms of nutrients that are provided in mammals. Cats are obligate carnivores which require vital nutrients found in the organ, bone and muscle of prey mammals such as mice or gophers. For instance, during clinical trials cats that were fed canned salmon or tuna developed a Vitamin K deficiency.1 Vitamin K is naturally synthesized in cat’s guts from the prey animals it consumes, and researchers do not know why this process was stopped in the cats that ate processed tuna or salmon. Therefore, a Vitamin K supplement is required by AAFCO to be added to processed fish for pet food.2 The only approved supplement, Menadione Sodium Bisulfite Complex, has been linked to a slew of toxicity problems in both animals and humans.3 A cat that eats processed tuna or salmon now won’t develop a Vitamin K deficiency, but could suffer from kidney or liver damage down the road.4
Some types of fish, including tuna, mackerel, herring, minnow, bass, smelt, anchovy and carp among others contain thiaminase. Thiaminase is an enzyme that inactivates Vitamin B1, also known as thiamine.5 Cats have a requirement for thiamine that is usually satisfied by eating meat, bones and organs. However, since thiamine is water soluble it means that cats need to consistently be consuming it in order to get enough. If cats eat the aforementioned fish consistently it can lead to a Vitamin B deficiency.6

Fish Has Been Linked to Toxic Pollutants in Cats

Another concern about fish isn’t what they lack but what they contain. Heavy metals, PCBs, POPs, BPA and PDBEs are found in high levels in fish such as tuna, salmon, trout, mackerel, bonito, halibut and ocean whitefish. Polychlorinated biphenyl, or PCB, was once widely manufactured for human use but was banned from the U.S. in 1979 because of environmental toxicity concerns. However it is still used elsewhere, is found all over the environment and has been linked to cancer in humans and animals.7 Persistant organic pollutants, or POPs, are toxic chemicals such as pesticides, pharmaceuticals and solvents that resist degradation and have been banned but remain in our environment. They can accumulate in animals and humans through the food chain and have the potential to disrupt the endocrine, reproductive and cardiovascular systems.8 Polybrominated diphenyl ethers, or PBDEs are compounds that are used in flame retardation and have been found to lead to low fertility in humans.9 Because of their inability to decompose, PBDEs have been found in high concentrations in fish at the top of the food chain, and have been linked to hyperthyroidism in cats.10

Fish Has Been Linked to Allergies in Cats

Addiction and allergies are both common problems when it comes to feeding fish as well. Most cats love the taste of fish, and can even go on a hunger strike until they are fed it. Fish is one of the top allergenic foods for cats11 and this could be because of the high levels of histamine.12 Allergies symptoms include itchy skin, hair loss, and dermatitis.13 So even though your feline loves it, it’s a good idea to keep the fish feeding to a minimum, and rotate proteins often.

All that being said, you don’t have to go on a TOTAL fish strike. Cats do need omega-3s in order to be healthy.14 Omega-3 fatty acids are found naturally in grass fed meats, but if the meat is corn fed their omega-3s are turned into omega-6s.15 Although omega-3s occur naturally in flaxseed, cats cannot usefully convert them, so they do need a marine source16 if they are not eating grass fed proteins or other sources of DHA and EPA such as brains and eyeballs.17 Fish oil that is sourced from high quality wild caught, not farmed, fish can be a beneficial source of omega-3 fatty acids for your feline.18 Research where your fish oil comes from and keep in mind the toxicity of this world’s oceans as well as the food chain. Certain fish in small amounts can be safe to use sparingly as a treat. However, with all the options in the pet store, it may be the best choice for your kitty to avoid fish based meals. 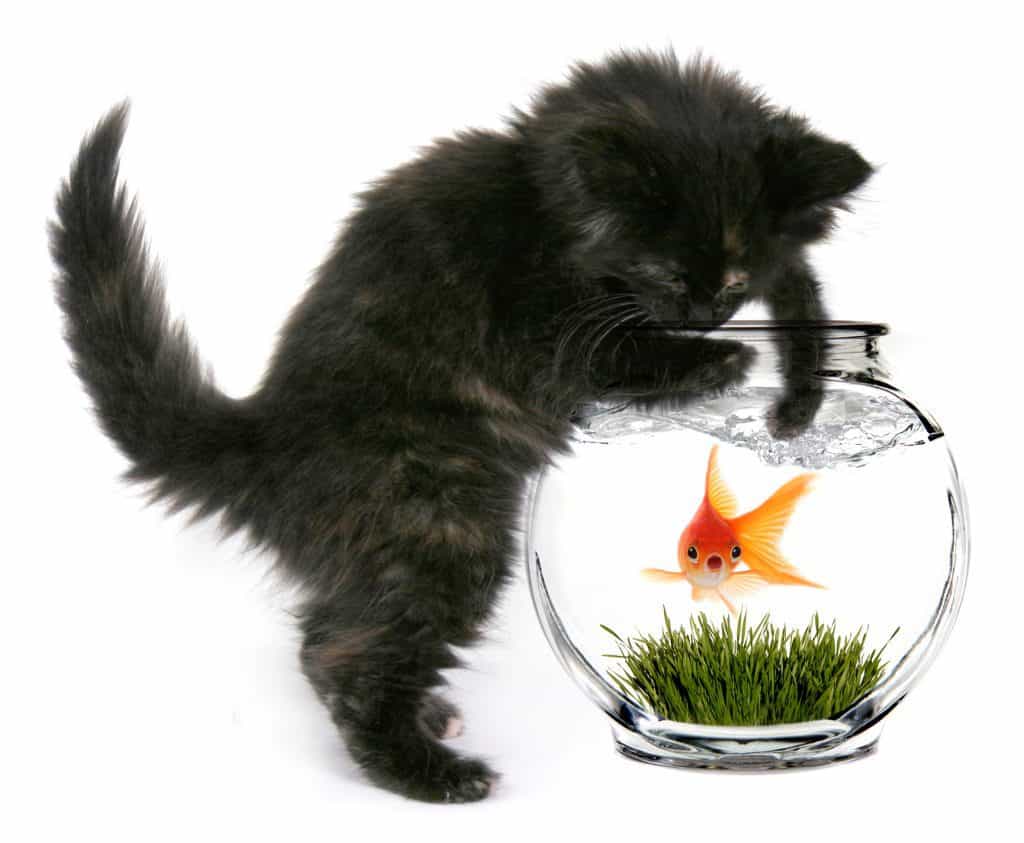 Hyperthyroidism in Cats: An Environmentally Based Epidemic Prey Model Raw

Hyperthyroidism in Cats: An Environmentally Based Epidemic

Due to increased reports of package theft and shipping delays we highly encourage you to special order our food from an independent pet store near you. Contact us for help 💗 Dismiss